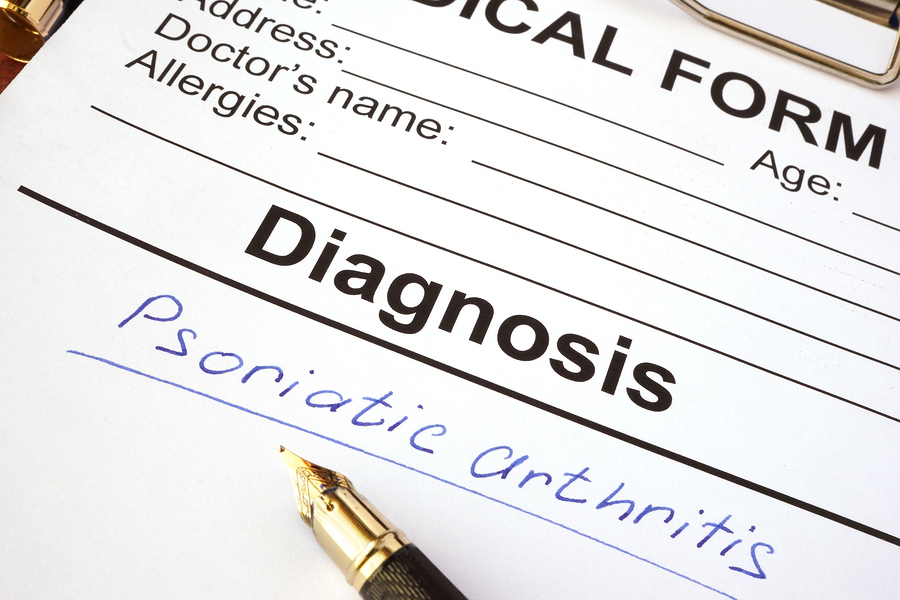 What Is Psoriatic Arthritis?

Psoriatic arthritis is a form of arthritis (joint inflammation) that can occur in people who have the skin disease psoriasis. Psoriasis is a common condition characterized by scaly red and white skin patches. Psoriatic arthritis can affect any joint in the body, including the spine.

Anyone can be affected by psoriatic arthritis, but it is more common in Caucasians than African Americans or Asian Americans. It most commonly appears between the ages of 30 and 50, but it can also begin in childhood. According to the Centers for Disease Control and Prevention (CDC), 10 to 20 percent of people with psoriasis eventually develop psoriatic arthritis. Typically, skin disease precedes the arthritis, sometimes by several years. However, in some cases, arthritic symptoms appear first.

What Is the Cause?

What Are the Symptoms?

Psoriatic arthritis affects both the skin and the musculoskeletal system. The joints most commonly affected are the distal joints (those closest to the nail) of the fingers or toes, as well as the wrists, knees, ankles, and lower back.

Musculoskeletal symptoms may include:

Skin symptoms may include:

Other symptoms may include:

How Is Psoriatic Arthritis Diagnosed?

The diagnosis of psoriatic arthritis is made based on the findings of a medical and family history and physical exam as well as x-ray or magnetic resonance imaging (MRI) of the affected joints. Although there is no lab test to diagnose psoriatic arthritis, your doctor may order tests on blood or joint fluid to rule out other forms of arthritis with similar symptoms. If you have psoriasis and start to develop joint pain, it’s important to see your doctor. Early diagnosis and treatment of psoriatic arthritis can help prevent irreparable joint damage.

How Is Psoriatic Arthritis Treated?

Treatment for psoriatic arthritis will depend largely on its severity. If the disease is mild and affects only a couple of joints, treatment with nonsteroidal antiinflammatory drugs (NSAIDs)1 may be sufficient for treating pain and inflammation. For acutely inflamed joints, corticosteroid injections may be helpful. For more persistent disease affecting multiple joints, stronger disease-modifying antirheumatic drugs (DMARDs) and/or antitumor necrosis factor (TNF) agents may be needed to control the disease.2

1 Warning: Side effects of NSAIDs include stomach problems; skin rashes; high blood pressure; fluid retention; and liver, kidney, and heart problems. The longer a person uses NSAIDs, the more likely he or she is to have side effects, ranging from mild to serious. Many other drugs cannot be taken when a patient is being treated with NSAIDs, because NSAIDs alter the way the body uses or eliminates these other drugs. Check with your health care provider or pharmacist before you take NSAIDs. NSAIDs should only be used at the lowest dose possible for the shortest time needed.

2 All medicines can have side effects. Some medicines and side effects are mentioned in this publication. Some side effects may be more severe than others. You should review the package insert that comes with your medicine and ask your health care provider or pharmacist if you have any questions about the possible side effects.

What Research Is Being Done?

Researchers throughout the United States and the world are conducting research that will eventually improve the understanding and outcomes of psoriatic arthritis.

Some promising areas of research include:

Genetics. Scientists supported by the National Institute of Arthritis and Musculoskeletal and Skin Diseases (NIAMS) are working to uncover genes associated with psoriasis, as well as modifier genes that can indicate which people with psoriasis are also at risk for psoriatic arthritis. Identification of genes that increase the risk of psoriatic arthritis will help scientists unlock the secrets of this troubling disease, and identify targets for more specific and effective therapy.

Role of vitamin D. Studies have shown that vitamin D insufficiency is common in people with psoriatic arthritis. Investigators supported by the NIAMS are studying the effects of vitamin D supplementation, along with marine omega-3 fatty acid and docosahexaenoic acid (DHA), on incidence, inflammation, and chronic pain in autoimmune diseases including psoriatic arthritis.

Risk factors. To better understand what causes psoriatic arthritis, with the eventual goal of stopping its development, scientists are looking into factors that predict risk of arthritis among people with psoriasis. One study found that people with psoriasis who reported being obese at age 18 were more likely to develop arthritis and develop it at an earlier age than people with a normal body mass index (BMI). Other research has shown that more severe skin disease is predictive of an increased risk of joint disease.

Diagnostics. The similarity between psoriatic arthritis and other inflammatory forms of arthritis can delay an accurate diagnosis, particularly when the arthritis precedes the skin disease. Researchers looking for better ways to diagnose the disease discovered that a technique called contrast-enhanced MRI may help doctors differentiate between rheumatoid arthritis and psoriatic arthritis in the hand and wrist, enabling them to target therapies to each condition.

We also use Analytics and Advertising Services. To disable click on Additional Information.